Modal split: Don’t trust any statistics you haven’t modelled yourself

The modal split represents the primary indicators to transport planners and mobility consultants. It is probably as important to them as the gross domestic product is to each and every country worldwide. But what does this popular technical term actually mean? And how is it calculated? In the following, we provide an overview and point out the problems associated with it.

The modal split represents the primary indicators to transport planners and mobility consultants. It is probably as important to them as the gross domestic product is to each and every country worldwide. But what does this popular technical term actually mean? And how is it calculated? In the following, we provide an overview and point out the problems associated with it.

What is the modal split?

The modal split is the most important indicator for the optimisation of transport with regards to ecological, social and economic requirements. It is used, for example, in urban planning and in the development of sustainability concepts. The modal split shows the percentage-wise distribution of traffic volume among different means of transport in a defined area. It shows how users are divided between different modes of transport. The underlying metric is the number of trips or sometimes also the passenger kilometres travelled, which is more accurate, but also offers more room for interpretations. This way, the mobility behaviour of the population of the respective area is mapped with a characteristic value that is as simple as possible – the basis for the introduction and analysis of transport and spatial planning measures.

How the modal split is calculated

Surveys are carried out to calculate the modal split – but sample sizes, sampling and survey type are not clearly defined. One variant, for example, would be to select households at random from the population register and to contact them by telephone – another method would be to contact the households area by area.

Distinction between bimodal and multimodal split

Criticism of the modal split

Don’t trust any statistics that you haven’t modelled yourself – our headline should be less a criticism of the concept of the modal split itself, and more a warning.  The modal split is a key figure whose measurement can be interpreted individually. On the one hand, this means that different statistics from different sources are not really comparable with each other – and that everyone can model their analysis in such a way that the resulting statistic is advantageous for their plans. As mentioned before, it is not only open which values are included in the statistics – but also how they are measured. Due to divergent methods of collection, large differences in quality can arise between different surveys. Another point of criticism is that we do not make every journey exclusively by a single means of transport. The multimodal split gives us the possibility to depict this as well – but the more detailed the depiction, the more complex it becomes. Depending on the questions asked, the results of the surveys can differ greatly from one respondent to another. With the background knowledge that the modal split gives great scope for different interpretations, it is even more important to select a specific model with the associated parameters and to conduct all future surveys in exactly the same way, taking the same factors into account and thus guarantee continuous data quality and reliability.

A large mobility survey was conducted in Austria from October 2013 to October 2014. Why do we refer to such “old” data? An Austria-wide survey is extremely complex and serves more to track medium- to long-term changes than to convey current circumstances. “Österreich unterwegs 2013/2014” was the first data collection on Austria-wide mobility since 1995 – and its successor is not yet in sight. The survey was conducted by mail, including advance notice, and took place throughout Austria. Of about 65,000 households surveyed, more than 18,000 took part. Quality assurance was carried out externally.  The survey showed that on work days in Austria almost every second trip is made as a driver in motorised private transport – i.e. as a driver of a car or motorbike or similar. Only about 12% of journeys were made as passengers. On average, Austrians travelled 36 km and took about 70 minutes per work day to do so. 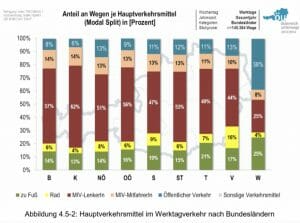 In the course of the mobility survey “Österreich unterwegs 13/14”, the main modes of transport on workday traffic were examined, among other things. The differences between Vienna and the more rural provinces of Burgenland and Carinthia, for example, are particularly interesting. While in Vienna 25 % of journeys are made by foot and the same number by car, in Carinthia, 62 % of journeys are made as motor vehicle drivers. Only 17 % of the Carinthian modal split represents active mobility, i.e. by bike (13%) or by foot (4%) . A comparison with a modal split based on kilometres travelled would be interesting – the impression would definitely increase in clarity. 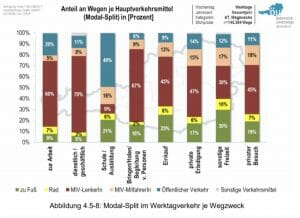 However, a modal split can also be structured in a much more complex way – here, for example, the modal split in workday traffic is shown per trip purpose. It can be clearly seen that especially in the context of work, the share of car drivers clearly predominates. The bicycle is used rather for leisure time or for school/training. 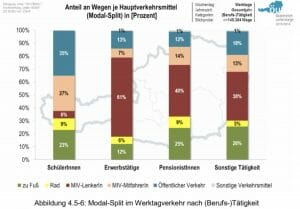 However, a modal split can also provide information on the choice of transport according to (occupational) activity or, for example, according to gender or age. Here again, it is particularly interesting to note that people in employment use cars for the majority of their trips. The problem is that very few of them travel as passengers. This is where a shared mobility program could be introduced to reduce the number of cars on the road.More details and a huge amount of additional statistics on Austrian mobility can be found in the results report – download here: https://www.bmk.gv.at/themen/verkehrsplanung/statistik/oesterreich_unterwegs/berichte.html

Together with Triply we have launched the upScore Mobility Audit – an application to analyse commuter flows and company locations. It offers you the possibility to carry out comprehensive analyses of your employees’ mobility – and provides you with tailor-made measures to improve your company’s mobility management. Start your upScore Mobility Audit now with a quick contact request at the bottom of our landing page!

A shared mobility concept is a matter of prestige for companies. Consideration towards ecology, innovation and sustainability. Building bridges –...

Mobility trends of the young and the old: A challenge for companies

Personal mobility is subject to permanent change. Trends such as digitization, urbanization and the sharing economy have a major impact on how we...

A briefing: Modes of sustainable mobility within companies and how to promote them

In one of our last blog articles we talked about how the corona pandemic is the perfect launchpad for positive changes within your company....

Stay in the loop with triply's mobility insights

Be the first to know about new developments and events around the Mobility industry.